All kinds of sweets

Sakura Minamoto (源 さくら,, Minamoto Sakura?) is the main protagonist of Zombieland Saga. Before becoming a zombie she was an ordinary girl who faced various misfortunes. She died in 2008 getting hit by a pickup truck on her way to an idol audition. She's also a member and the center of the idol group Franchouchou and is known as Number 1 (1号, Ichi-gō?).

Sakura has straight, dark rose-pink hair with a section of it brought up with a blue and pink bow and some hanging over her shoulders, her bangs are brushed to the left side, and blue eyes. Like the other zombies, she has grayish-blue skin, red eyes and a large scar across her face.

In her casual human form, Sakura still sports what would have been her school uniform: a navy-blue and white dress, white socks, and brown school-shoes. As an Idol, she wears a pale pink top with "1" written on it, along with two hearts. Sakura also wears a hot pink skirt with white frills.

Sakura is shown to be an energetic girl when she was still alive. However, that spirit seemed to turn into confusion, worry, and slight fear after she regains her consciousness as a zombie. However, she becomes very passionate whenever she is singing as an Idol.

Sakura lived a complicated life in her childhood. Initially, she was an energetic and ambitious girl who strived to work hard for the many important roles she gained. Though she worked most of her life to train herself, they all came down on the day of opportunity through a series of unfortunate events. She either ended up injured, forced to help people, or unable to make the cut. These strings of unlucky coincidences continued throughout her school life and even interfered with her personal life and hobbies.

The bad luck and misfortunes she endured throughout her life caused Sakura to develop a pessimistic personality. She stopped trying and lost her self-esteem under the fear of another tragic or embarrassing failure. While still in high school, she saw an idol interview with Iron Frill leader, Ai Mizuno. In her interview, she entailed her success story from her beginnings, learning from her mistakes, and tackling obstacles to become a successful idol. Filled with curiosity, Sakura attended one of Ai's concert to see her in action. From her spirited performance, Sakura was filled with inspiration after seeing her on stage.

With her spirit renewed, she set off to try one last time by participating in an idol audition. But shortly after heading out, her new ambition took an unexpected turn when a truck crashed into her, taking away her life and died. 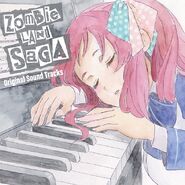 Sakura and Tae in bikinis have very similar well-endowed figures.

Add a photo to this gallery

Retrieved from "https://zombieland-saga.fandom.com/wiki/Sakura_Minamoto?oldid=5554"
Community content is available under CC-BY-SA unless otherwise noted.