Zombieland Saga Wiki
Register
Don't have an account?
Sign In
Advertisement
in: Characters, Zombie, Members of Franchouchou,
and 2 more
English

"There’s nothing legendary about throwing your whole life away, I’ve found something way more badass to work towards. I’m here to show you a taste of what it means to be a real legend!"

Caitlin Glass
Saki Nikaido (二階堂サキ, Nikaidō Saki) was a motorcyclist in life who, together with her best friend, Reiko Amabuki, alongside the rest of the Dorami Biker Gang, conquered the entire island of Kyushu (九州 Kyūshū).

She is currently the leader of Franchouchou where she is titled as The Legendary Chief Biker (Densetsu no Tokkō Taichō).

Saki has thigh-length blonde hair that has orange and green highlights tucked into a high ponytail with bangs mostly swept to the left where it has a single orange highlight and orange eyes.

Her casual outfit consists of a brown and white jacket over a white blouse and a blue knee skirt. She also wears her shirt with a dark orange necktie.

In the second season, it is evident that her natural hair color is blonde and that the orange and green colors in her hair are dyes that she made while she was a gang member.

Like the other zombies, Saki has grayish blue skin and red eyes, along with scars on her left cheek, left arm, and right leg, as well as bandages that cover her torso, upper left arm, right arm, and left leg. As a zombie, her hair is noticeably messier and duller in color. She lets go of her hair while she sleeps.

Her idol outfit changes throughout the series: On episodes 1-6, Saki wears a gold T-shirt with the word "弐" ("two") written on it, along with an orange skirt with white ruffles. Using makeup, she and the other zombies make their skin look like a normal human. Saki also wears contact lenses to achieve her golden eyes that she had as a living person.

After Saga Rock, her idol outfit changed to a red jacket with a plaid decoration, orange skirt with cotton inside it and knee-high boots.

Although in her life as a gang member she was rude, in reality Saki was quite weak in the past which caused her companions to mess with her in the past and made her come back quite strong. She was a friendless and even more rebellious girl before joining Dorami, unsure of the direction she was taking, until she heard the White Ryu radio broadcast that inspired her to do something with her life, leading her to befriend Reiko and Dorami in life.

In life, she used to hang out with her gang at "Drive in Tori", a popular chicken restaurant, and grew up watching the Kashima Gatalympics. Her modus operandi is to be the badass, she was an unfettered thrill seeker who often sought out challenges, a trait that eventually cost her her life.

She certainly was impetuous and courageous, but this trait of hers ended up being her Fatal Flaw, because she was so determined to win the chicken game against the rival gang that she kept speeding up and was mortally wounded by the resulting crash.

Saki has a tough and rebellious attitude, she calls Sakura a brat and openly declares that she has no respect for those who have no guts. However, after a successful performance, Saki takes being an idol very seriously and becomes the leader of Franchouchou.

Sakura outplayed her in an impromptu rap battle where the first of her basically tells her to fuck herself all the time and earns Saki's respect. Before that, Saki spent most of the episode antagonizing Sakura or treating her like easy prey.

Normally, she is just as upset with Kotaro as the rest of the girls, and she didn't hesitate to look down on them. In episode 5, she becomes much nicer to him when she discovers that she has booked appearances for them on Drive In Tori and Gatalympics, both of them screaming at her shared enthusiasm.

She goes into fangirl mode upon meeting Cocco, she turns into a completely emotional nerd when he's around her and gets upset when she feels like others can't live up to her acting standards.

Despite being a rude criminal with the purpose of taking over the country, she shows great kindness towards children and an awareness of social norms, knowing full well that her harsh and violent attitude towards her gang will not work for her to be the largest idol group in the country. Saki also occasionally shows a soft side to her, as seen in episode 6, where she comforts Ai after she tells her how she died.

Dead or alive, Saki has never had a clue what it's supposed to be "normal", and she has never understood what other people see in it. She struggled to relate to Reiko's desire to leave the gang and start a family one day, and at first she has trouble connecting with the other girls due to her radical nature.

She gets a second chance as a zombie and does the exact same thing again. She survives this time thanks to her undead nature, even though she had no guarantee that she would have survived the accident intact enough to continue functioning.

When she was taken to the mountains she showed a rather reckless attitude in adding wet wood to the fire that Lily was making, however she was quite cooperative with the group in collecting dry wood after the incident. When Sakura got depressed, she went to look for her in person with the excuse that she was going to wash her face but when she arrived she couldn't convince her and used her non-dominant hand to slap her showing that she didn't really want to hurt Sakura, it was visibly seen affected by that and began to cry. But she showed great appreciation and understanding for Sakura after she regained the memories of her.

Saki is equally ecstatic when Kotaro says they will work with White Ryu, her icon from her whole life. Unlike other characters, she accepts his old-fashioned tendencies one hundred percent. Justified given that White Ryu's work helped her get out of a difficult place in her life, and she is grateful that he allowed her to continue his work by broadcasting his radio show to her.

After White Ryu appoints Franchouchou to succeed him on his radio show, Saki confesses her feelings for him. However, he tells Saki to try again when she is a grown woman. Saki regretfully admits to Sakura that she knows she never will be since zombies don't age, and she bursts into tears when reality hits her once and for all. Ironically, for someone who lived fast and died young, she finds a reason to grow up only after she's already dead, and now she never will.

After the disaster that happened in Saga in Revenge episodes 10 and 11, she is still worried about attending her radio show on the current day and gets angry with Sakura for missing the date. When they finally can give their radio program, Saki is the one who talks to the citizens of Saga about the disaster that occurred and as being united they will all be able to overcome it, speaking from the heart she asks everyone who listens to her to go to the benefit concert in Franchouchou in order to help recover Saga. 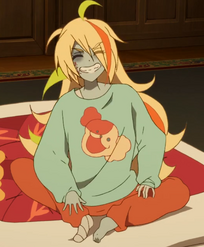 To sleep, she wear an oversized long-sleeved shirt in light blue with a rosemary print on it, with long orange pants, your hair is totally loose and tousled. 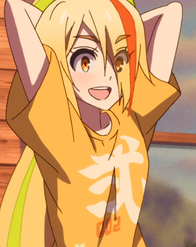 Saki wears a gold T-shirt with the word "弐" ("two") written on it, along with an orange skirt with white ruffles.

Saki wears an orange shirt and pants with black prints and black stripes, on his shirt he wears the logo of the idol company "ZLS", however from time to time the numbers 8888 can be seen on it, probably due to errors of drawing, but it may be a reference to zombie plan 8888.

Saki in her chicken suit, she looks happy 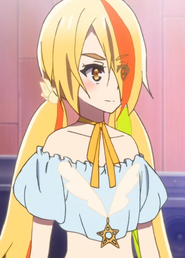 Costumes for the new song "To My Dearest", which was performed in a mini-live with Lily as the main theme. The members other than Lily wear fluffy white costumes. Also, they all have different hairstyles. 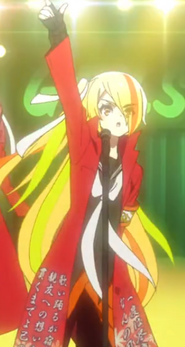 The costume that was shown in the new song "Tokkou Dance" with Saki as the protagonist. A style of women with special clothes in a lewd fashion called sailor clothes with long skirts. Only Saki's outfit, which is the center, is a black sailor and the special attack clothing is also embroidered, the hairstyle is side up for Saki. 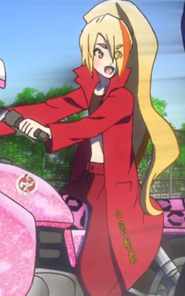 Saki before her death, wearing Dorami's classic dress with a black top.

Saki in the mountains in a nude shirt with jean pants that covers her up to the chest, she also has a green jacket and green boots 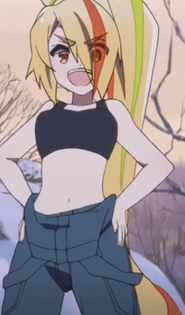 Saki without a jacket, with a black top 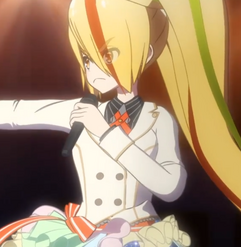 The outfit that was worn in Arpino's live solo in episode 12. A white swallowtail dress with a skirt. 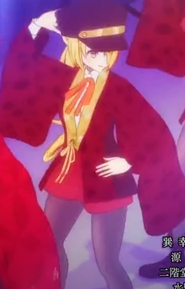 It's a Kakai costume, and the six girls have clothes reminiscent of the first students of the Meiji era. She wears a dark red vest and pink-red shorts, also brown boots, a hat that matches her clothing 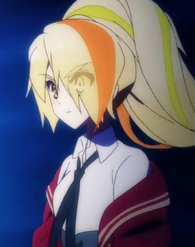 In the Revenge outfit, the girls wear red jackets and yellow skirts with plaid décor, plus knee-high boots. 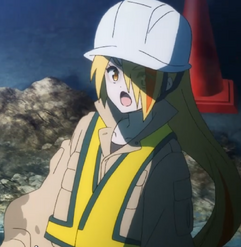 Working as a laborer, Saki wears the typical workman's outfit along with a white helmet 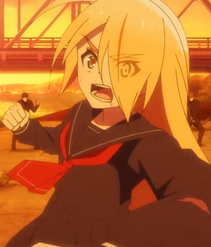 In her youth, Saki tended to wear a black private school outfit with a red bowtie

Saki wears the same normal clothes, only instead of the skirt she wears orange shorts 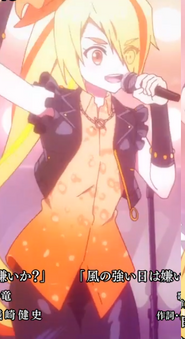 Saki wears an open jacket that reveals the yellow-orange suit behind, wears leather gloves and her pants are made of black leather, possibly referring to the suits of American motorcyclists. 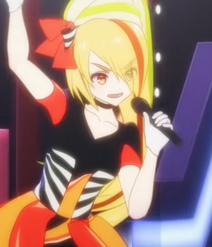 Saki wears a black dress with white stripes in the abdomen area, her skirt and shoulder pads are orange, her boots reach the knee and are white

Saki wears a long green dress that changes to navy blue in the lower part, she does not have a skirt 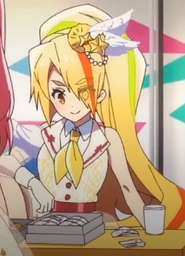 Saki wears a white dress with a red belt around the waist, a white skirt with gloves, and her signature yellow bow.