The Saga Governor (佐賀知事 Saga chiji) is a minor character introduced in episode 24. As his name suggests, he is the governor of the prefecture and the one who was in command during the prefectural floods.

He is a middle-aged man with a large build, like his real counterpart he has gray hair. During the rescue efforts he was wearing a blue rescue suit.

He is a serious man in his affairs and who shows an interest in the Saga prefecture. Although he was incredulous upon hearing Kotaro's plan to rebuild Tosu first, he accepted it as it was a way to connect Saga with the outside world and also to help with international aid for the Franchouchou benefit concert.

He appears in the headquarters of the Saga special task force as part of the prefecture's response to the floods that left Saga seriously affected, when Kotaro arrives screaming about restoring Tosu to help Franchouchou, he did not say a word about it but later seems to have acceded to the requests of this same. He was present at the Franchouhou concert proud of all the people who came to help Saga.

Saga Prefectural Governor Yoshinori Yamaguchi made an appearance during a Zombie Land Saga anime-themed television program that aired on TVQ Kyushu Broadcasting. Yamaguchi's love for the show was evident as he appeared dressed as Franchouchou's manager Kotaro at the same time that he copied his attitude.[1] 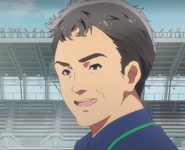