Mr. Yamada (山田さん Yamada-san) is the father of Tae Yamada, a folklorist from Saga University who is dedicated to researching the folklore of the prefecture, he carried out an investigation on a strange creature. He appears in Chapter 12 during flashbacks of Tae Yamada's life.

He is a middle-aged man with short brown hair, wearing a long-sleeved white shirt when he leaves the lab and black pants. He is of slim build and wears glasses.

He is a man very dedicated to his work even if it means spending less time with his daughter whom he loves very much. Due to his investigation, he spends little time at home and that frustrates Tae who wants to see him more often.

He spends a lot of time in the university laboratories together with his wife, Mrs Yamada. After they find a strange creature, he spends more time in the labs raising this strange creature. On Tae's birthday, they both give Tae a stuffed rabbit to which she is happy, but they seem to be obsessed with the baby and just mentioning it makes Tae angry since she doesn't want anything related to that child. A few hours later, government employees intercept him at the university where he works and he resists so that the baby is not taken, and although he tries to stop the government from taking the child, he is surprised by an explosion at the university that ends with his life immediately.

A photo with his wife and the baby 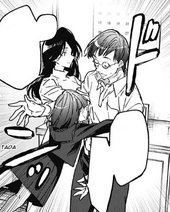 He tells Tae that he has a present for her

Surprised by Tae's attitude when they mention the baby

He is killed by the newborn Sagako
Español
Community content is available under CC-BY-SA unless otherwise noted.
Advertisement