"As long as Franchouchou exists, I will keep going, no matter what it takes! Your dream doesn’t end at EFS, your dream is to continue forward and be the best idols the world has ever seen! Until the time comes, I will...I will...be the man who will keep doing this, even if it takes forever."

— Kotaro to Sakura, responding to her gratefulness, “Episode 23”

He is the one who resurrected girls from different eras as zombies to be part of his idol group that saved Saga from its curse, Jofuku knows of his plans by being the brain of the operation.

Kotaro is a pale-skinned young man with neatly combed brown hair that has bangs swept to the right side, he wears a pair of dark sunglasses that always covers his eyes (so it is unknown on what his eye color is) and he has a muscly figure underneath his clothes.

His outfit consists of a white shirt with a dark blue bow and a red vest with dried squid tentacles sticking out of the pocket. He has a matching navy blue jacket that is hung behind his shirt collar, but it is never seen to be used properly.

This phase shown at the beginning of the second season shows us a depressed and careless Kotaro, letting his hair grow 20 cm more until he has hair that covers his face, he also has traces of a beard. His clothes consist of his usual pants and a very sloppy white shirt, he also wears sandals.

His old Inui personality is unknown, but since his name is totally opposite to his current one, it can be given the idea that he is shy and serious, as seen when looking for new commercials or deals for the girls and serious when talking with Jofuku.

His plan to save Saga from the curse; chooses various deceased celebrities and other influential figures who have already been killed by the curse, raises them from the dead, and makes them gain popularity as a regional idol group, all in the hopes of spreading Saga's name and preventing the curse from to erase the concept of Saga Prefecture. So far it has worked in his favor. Even Jofuku can't believe it worked.

Tatsumi is a loud and eccentric idol producer who has big ambitions for "saving" the Saga prefecture with his zombie idols. He is unwavering and passionate when it comes to achieving this goal, doing whatever it takes to make the girls into a sensational idol group. He seems to be obsessed with using the undead to revitalize Saga Prefecture, but no one knows the exact details of his plan, and he has the ability to dodge all questions about it using the most outrageous answers.

Though he may have lofty motivations, however, Tatsumi himself seems to be quite an idiot and often pretends to be more knowledgeable than he actually is. When his ignorance is ever revealed, he often resorts to lashing out and yelling at whoever called him out. He rarely ever takes into account the girls' feelings about his ill-conceived and unreasonable plans, such as forcing Sakura Minamoto to perform in front of a crowd of death metal fans when she explicitly told him that she couldn't.

He's loud and totally crazy for making a group of zombie idols, but he's incredibly effective at putting together successful performances, and he's such a skilled makeup artist that he can make decaying corpses pose as fully alive and impressive people.

Despite his flaws, Tatsumi does seem to have some semblance of wisdom and understanding, telling off Ai Mizuno and Junko Konno for giving up on the idol group so easily, which would eventually help convince them to join the group. Another time, when Junko locked herself up, he gives her advice on her issues with modern idols. He also shows this side by demonstrating a fair amount professionalism as a manager such as creating various business opportunities and connections and lecturing how Saki Nikaido's actions in a fight could potentially ruin Franchouchou's reputation.

Every time he tries to get someone's patronage, he tends to seduce them (regardless of gender), making them blush.

However, behind this overwhelming and eccentric personality, hides a quite discreet, anguished and reserved man. In fact, during the Gatalympics cycling event, we noticed that he has trouble expressing himself in public. We also notice, first in the manga, that he regularly doubts the success of his plans and then goes into phases of depression.

The manga version of the series seems to focus on the work Kotaro does to promote and secure concerts for Franchouchou in the background, while greatly abbreviating the girls' events (to the point where both the rap battle and the guerrilla show is only covered in single-page flashbacks - so far, the rock concert is the only event in the show covered in its entirety). This version of Kotaro is less impulsive and shows his true self, that he is an insecure man sometimes and that like any human being he will get tired if he reaches a certain point, such as having a stomach ache from the stress of supporting the group. He also does not know everything that is going on around him and he tends to get frustrated easily when he does not understand things or what to do, falling into a depressed state.

There will be times when Kotaro will genuinely get angry, such as Sakura breaking her mask after seeing her first sponsorship ruined, to which he tells her that he will shave it next time if she ruins it again. Junko refuses to take photos with fans at the photoshoot and also irritates him so much that he boils down to yelling at the girls. When Saki steps in to save Maria from a rival motorcycle gang, he is very serious when he tells him that if he gets into trouble like that, he could put Franchouchou in danger.

The big turning point in Kotaro's portrayal comes with Episode 7, when he helps Junko out of her bad mood and then accidentally runs her over. After that, he begins to get more involved as a helper and mentor to the girls, such as composing a song for Lily to sing to her father, warning Saki not to use violence to solve Dorami's problems or trying to get Sakura to give herself up. He realizes his flaws, and the audience begins to see the sides he tries to hide from the girls, such as his vulnerabilities or the broader mysteries he is involved in.

Out of his impatience he rushes to follow the steps to try to make Franchouchou as big as possible, making many hasty and impulsive decisions that are detrimental to the progress of the group. Given the pressure of fighting a deadly curse, there is some cause for it, but it still does as much harm as good in the long run.

This comes to a head with the disastrous EFS concert. He doesn't properly advertise the show and tries to rush the girls to the venue in a matter of weeks. This results in poor audience participation, a massive debt load, and Franchouchou's popularity plummets. At this point, he realizes how badly he has screwed up the girls.

He also does not know everything that happens around him and tends to get frustrated easily when he does not understand things or what he should do, falling into a depressed state.

In Episode 1 of Season 2, Kotaro became depressed after the disastrous failure of the Franchouchou concert, saddling the team with enormous debt with a very short deadline. As a result, he spent weeks isolated from girls, drank heavily, and grew his hair. Fortunately, he comes out of his depression after a conversation with Jofuku, just in time to save Franchouchou's performance at the metal venue.

In episode 3 of Revenge, Kotaro announces that the girls will open for Iron Frill, but that Ai will not be participating, claiming that the risk of being recognized by her former bandmates is too great. The "stealth" part is minimized here, as none of the girls buy this excuse, but only during the concert itself, that Ai realizes why he actually did this: the others had been relying too much on her, and Kotaro wanted to make them do it becoming more independent (as well as forcing Junko out of her shell a bit more).

He's quite attached to his electric guitar, has had it for years and uses it as a source of inspiration to keep moving forward... and then Junko smashes it to pieces during her performance.

When Lily takes full charge of Franchouchou's morning briefing for an episode, she makes her own version of her of Kotaro's nasty boos (although she is much cuter doing it). All he can do is walk to her empty chair and sit quietly, trying not to cry at the end. Not shortly after, he gives a miserable performance for the talent show due to not having his usual self-confidence.

When he believes that she killed Maimai, he is on the constant brink of a panic attack, trying to keep up with his morning routine, but eventually breaks down, desperately denying any guilt. Fortunately, he was innocent on that front.

In episode 10 of Revenge. He becomes disconcertingly serious when he talks about his plans for another EFS concert, and later when Ookoba confronts him, having finally uncovered Franchouchou's secret.

Barring a few rare moments, Kotaro won't stop once he's set his mind on something he plans to do. His inner thoughts after Sakura's death also explain it, regarding his dream of Franchouchou having a second chance at life, along with a chance to save Saga while he does so.

By the end of Revenge, he becomes much more responsible as a producer, being generally kinder to the girls and trying to make better decisions that will improve them as a group. Her relationship with Sakura also improves tremendously, and she is genuinely grateful that he helped her turn her into an idol.

The ugly shirt he designed for Franchouchou 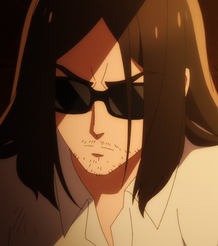 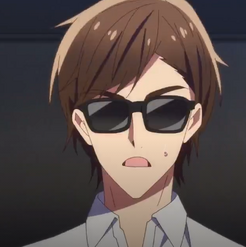 Kotaro without his classic jacket