Imari (伊万里市, Imari-shi) is a city located in Saga Prefecture on the island of Kyushu, Japan.

Imari is most notable for Imari porcelain, which is the European collectors' name for Japanese porcelain items made in the city of Arita, Saga Prefecture. The porcelain was exported from the port of Imari specifically for the European export trade.

During the Edo period, this region flourished due to the export of ceramics and porcelain. In what is now called Ōkawachiyama, high-quality products were produced and presented to Shōgun and the Imperial Court. From the Meiji period until 1955, coal was also an important export.

On April 1, 1954 the cities of Imari and Yamashiro, and the villages of Higashiyamashiro, Kurokawa, Hatatsu, Minamihata, Ōkawa, Matsuura and Niri were merged to create the present city of Imari.

This city was the event center for the Drive in Tori commercial from Episode 5, as well as being the place where Ai works at Kojima's food factory. This is the same city where Dorami had more presence due to the influence of the Dirve in Tori in the group meetings to eat at the restaurant.

Places seen in the anime 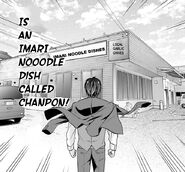