President of the Drive In Tori fast food chain

He is a middle-aged adult wearing a pink t-shirt with gray cloth pants with a dark gray apron on the front. When he goes on formal trips he wears a black business suit with a tie.

He is a somewhat calm man and worried about keeping his place afloat in Saga, he is willing to shoot a commercial together with the new Saga idols since apparently he likes the idol theme.

Kotaro makes Franchouchou show up at the Drive In Tori to get them to do a joint commercial that increases the popularity of the place. Which they end up doing with the help of Tae and Cocco.

He cameo on the premises after the floods as he listens to the radio broadcast.

Chapter 7 He appears shortly after Kotaro returned to the restaurant after a day of hanging out with a mysterious man who he thought was the president of the Drive In Tori.

Just like the governor of Saga and the Announcer Girl, his character is based on the real-life president of Drive In Tori. 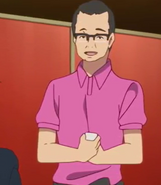 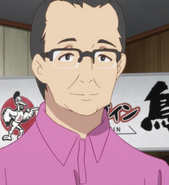 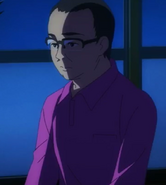 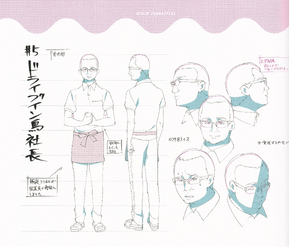