The Dorami Biker Gang (怒羅美 Dorami) is a fugitive tribe that conquered the Kyushu region in the late 20th century, with Reiko Amabuki as their first leader and Saki Nikaido as their second-in-command. There is a legend saying they managed to conquer Kyushu.

As of “Episode 18”, the group was rebranded as the Dorami Dance Team by Maria Amabuki.

As of 2018, Reiko's daughter Maria is headed as the eighth leader, but even with the leader, there are three members, and their motorcycles have been downgraded to a moped scooter with some decals.

She had a rivalry with Kosuke's team, from the time of her first leader and the current leader of the group, Misa, she still kept minor roses with the gang.

Both teams finally settled down due to Saki's efforts, and became fans of Franchouchou after leaving their disputes. 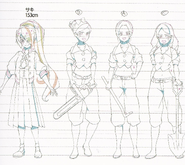