Coco (コッコくん Kokko-kun) is a recurring character in Zombie Land Saga. He is the mascot of the Drive-in Tori, a real-life fried chicken chain in Saga Prefecture and wears an anthropomorphic chicken suit all the time.

Cocco is a person with a white anthropomorphic chicken suit and a Drive in Tori t-shirt, being a chicken suit it has the classic characteristics of a chicken but caricatured.

Very elegant and classy, if a bit silly, he dances lightly at random intervals and loves to show off to the audience about him. He is possibly the dumbest resident of Saga, being a person in a chicken suit who does nothing but dance.

He shows up to give a commercial together with Franchouchou at the Drive in Tori, but is repeatedly chased by Tae. In the end, thanks to Tae, they manage to film the perfect commercial.

He reappears at a dance contest where he is well known and agrees to let Tae enter the duel even though she wasn't registered. Even though his dance didn't stand a chance with Tae's, as a good contestant he accepts his defeat against Tae and gives her the set prize.

He makes a cameo appearance arriving at the Ekimae Fudosan flying. 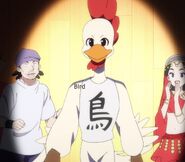 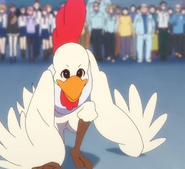 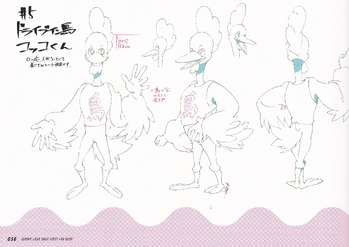